Due to a great popularity of cycling for recreational and competitive purposes three mountain bike trails have been created and marked in the area of the Kozara National Park in cooperation with Pro-cycling Cycling Club, Prijedor.

Above-mentioned trails will provide all fans of excitement and adrenaline and hilly rides with not only enjoyment of riding a two wheeler but also enjoyment of the Kozara National Park natural beauties.
The diversity of plants and animals, forest complexes, viewpoints, glades, brooks and dynamic relief will make your ride more attractive.

The trails can be used by both recreational and professional mountain biking fans for the purpose of training and competitions. The trails use existing communications such as asphalt and macadam roads, dirt roads, skid roads.
These loop trails begin and end at Mrakovica, the central part of the Kozara National Park. The shortest trail is 4 km in length, with an elevation of 175 m. It is a recreational trail and it stretches in the area of Mrakovica. Other trails are created as competitive ones, but they can also be used for recreational purposes.

The signage is simple featuring metal rhomboid posts with marks. Each trail has different color of sign posts upon which they were named: Blue, Green, Red, Yellow and they have different length and difficulty rating.

Mrakovica Blue Trail is an easy loop trail around the Mrakovica plateau. It is 4 km in length and goes along asphalt roads. This trail passes by all the major tourist facilities in the area of Mrakovica and it is suitable for all ages.

The other trails are designed for trained cyclists i.e. mtb fans, and they require physical strength and specific gear and equipment. 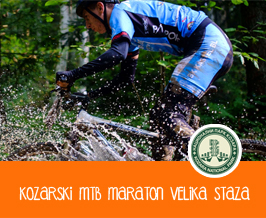